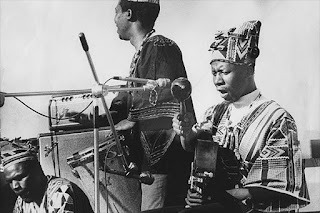 From the stunning, self-titled debut of Batsumi, a South African spiritual jazz group, "Empampondweni" begins by pulling the listener in with it's circling rhythm and call & response vocals, before taking their well-earned attention on a joyous journey once the focus shifts to the jaunty interplay between the saxophone, flute, and guitar.

Recorded in 1974 Johannesburg against the backdrop of apartheid, Batsumi were actually one of the few South African jazz groups of their time to leave a recorded history. That it was recorded in such stunning fidelity, thanks to their use of a high quality studio usually used for radio jingles, just makes it all the more special.

at January 23, 2019
Email ThisBlogThis!Share to TwitterShare to FacebookShare to Pinterest