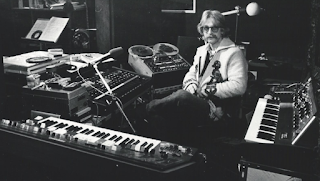 A good thing this blog gets me to do is finally look up the meaning of song titles that aren't in English. I'm such a nut for getting lost in in the sounds that I often forget to investigate the meaning the music held for the artist.

Here, we have a beautifully sweeping Klaus Schulze-produced synth-stunner that translates to "That Sweet Summer on the Pianet". The pianet is a model of electric piano made in Germany, which I don't believe was actually used in the making of this track (it's not listed), and so the song is an ode to a summer spent with a specific instrument that we aren't hearing. I love that. To have such a strong feeling for an instrument that you have to express your feelings through music made on other instruments.

at April 17, 2018 No comments:
Email ThisBlogThis!Share to TwitterShare to FacebookShare to Pinterest
Labels: not on spotify Barcelonian brothers take the developments on Spanish music that had been added in the Caribbean and New York to run it back through their own Romani perspective. In this style, referred to as "rumba catalan", they made songs that feel like an alternate take on the amazing boogaloo sound that came out of NYC's Puerto Rican communities in the 1960's. I could have posted almost any song off their first album, but this is the one that first attracted me to them and it has such a wonderful open sky attitude, so how could I resist?