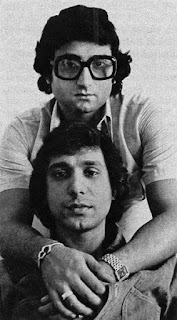 Barcelonian brothers take the developments on Spanish music that had been added in the Caribbean and New York to run it back through their own Romani perspective. In this style, referred to as "rumba catalan", they made songs that feel like an alternate take on the amazing boogaloo sound that came out of NYC's Puerto Rican communities in the 1960's. I could have posted almost any song off their first album, but this is the one that first attracted me to them and it has such a wonderful open sky attitude, so how could I resist?

at April 16, 2018
Email ThisBlogThis!Share to TwitterShare to FacebookShare to Pinterest