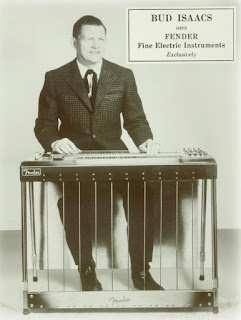 Named after a bootleg alcoholic drink that can be brewed in one day and initially recorded in 1950 by the African Dance Band of the Cold Storage Commission of Southern Rhodesia (and what a name), "Skokiaan" became a worldwide phenomenon in 1954 spurring a multitude of covers from artists across the musical spectrum; The Four Lads to Perez Prado. To me though, this Bud Isaacs take of it on his pedal steel guitar stands above all the other versions I've heard.

As the originator of adding the pedal to the steel guitar, Bud Isaacs certainly earned his place in my personal heroes of music history, but his playing here is so ebullient that he'd probably have earned the spot with this song alone.

at January 14, 2019
Email ThisBlogThis!Share to TwitterShare to FacebookShare to Pinterest
Labels: not on spotify