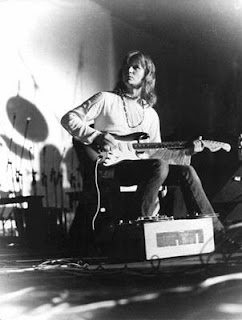 Though I've tried a few times, I've never found my way into American jam bands. There were a few early Grateful Dead tracks that did something for me, and a Jerry Garcia guitar piece off the Zabriskie Point soundtrack that I quite enjoyed, but even those have seemed like outliers of the genre. The jam bands from the other side of the Atlantic, those of the 70's European psychedelic scenes, always seem to capture my attention.

This track from guitarist, Achim Reichel typifies what I'm always hoping for American jam bands to be; a bouncy little balm for whatever ails ya. Reiched started as a member of a 60's German rock band in the Beatles mold, The Rattles, before leaving to record solo prog experiments as A.R. & Machines. The title here translates to "Three in One", referring to the songs three distinct sections, in case you didn't take German in high school, or did but somehow paid less attention than me.

at January 18, 2019
Email ThisBlogThis!Share to TwitterShare to FacebookShare to Pinterest